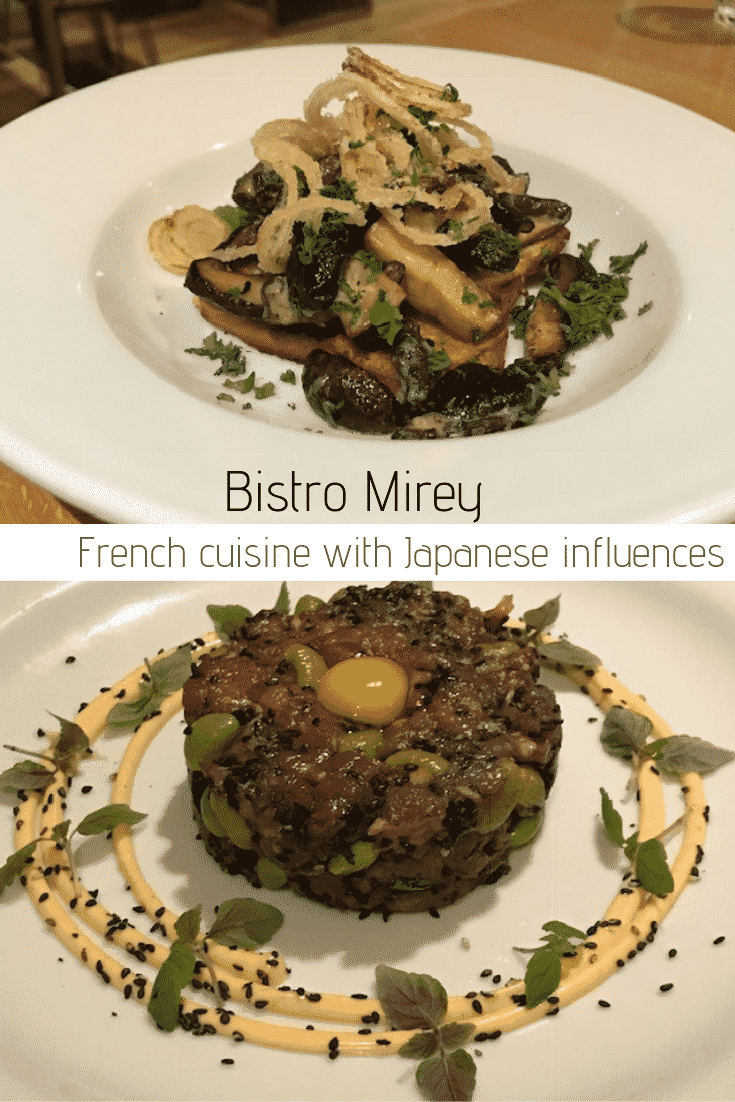 A friendly and cosy bistro in Fulham serving French and Japanese fusion food.

We were invited to try Bistro Mirey – a rather innovative concept marrying French bistro style cooking with Japanese ingredients. As a fan of both cuisines, I was intrigued to try a combination of the two.

Bistro Mirey was started by Chef Gerald Mirey and his flatmate Ko Ito in January, 2018. Gerald, from Normandy, is a classically trained French chef. He has previously worked for The Boisdale, the Garrison and Gordon Ramsay’s The Narrow. Ko is from Hokkaido island, Japan and has experience in running supper clubs. Together, they set up several pop-up restaurants serving French dishes, and trying out French cooking with Japanese influences.

Once we were seated, Gerald came over for a chat. He explained how he drew inspiration from the flavours and techniques of Japanese cuisine, combining ingredients such as sesame seeds, miso, wasabi and dashi, with his own classic French training, to create new flavours.

Their new fusion flavours became so successful that they opened Bistro Mirey, combining home style cooking of a bistro with the informality of a Japanese Izakaya.

Keen on keeping a low carbon footprint, ingredients are mostly sourced locally and from the neighbourhood market, while meats are from family run HG Walter in Barons Court.

It is a lovely touch that they change the menu seasonally, however a few popular dishes remain all the year round, and they also have blackboard specials.

Our food arrived fairly quickly. The bread was a wonderful sourdough from a local Italian bakery in Fulham, called Little Sourdough Kitchen. Served toasted, it arrived with a delicious miso butter made in house and from scratch. The butter had that delicious fresh, creamy taste of homemade butter, while the miso added a saltiness and exquisite depth of umami flavour. It was so good, I began cutting off tiny slivers to eat it on its own!

Not only did it go well with the warm bread, it would be perfect on roasted meats and vegetables, to add an extra layer of flavour.

In fact, their miso butter is so popular, Gerald is hoping to start producing and selling it sometime in the new year to help raise funds towards the charity, Age Concern.

We loved the Japanese mushroom fricassée on toasted brioche. The mushrooms tasted as if they had been cooked in the delicious miso butter with garlic.

The Sea bass and seafood bouillabaisse was a tasty combination of flavours. Fish and vegetables (fennel, potato and carrot) were served together with a light saffron broth made with Japanese dashi.

While most ingredients are sourced locally, the Charolais beef for the Steak Tartare is imported from France. Served as a starter or main course, it is one of the most popular items of the menu.

The beef was rich and butter soft, and had some punchy flavours from the black sesame seeds, Japanese chilli sauce, Tamari soya sauce and ginger. A quail’s egg yolk added creaminess, while edamame beans gave a wonderful starchy and crunchy balance, and a wasabi sauce gave a lovely kick. There were so many flavours in this dish which worked well together – I can understand why it is so popular.

For dessert we tried the Christmas nougat parfait with a caramel sauce, and the Chocolate and almond cake with a generous scoop of matcha ice cream on top. The chocolate cake was our favourite of the two – silky smooth, with a wonderful chocolate flavour and not too sweet. It was a perfect ending to the meal.

I look forward to trying their Brunch (Thursday to Sunday). It includes a very popular full French breakfast, and some ‘Funky egg’ dishes amongst others.

As this part of Fulham (North End Road) is popular with vegans and vegetarians, all diets are catered for, including gluten-free.

Disclosure: I was invited to review Bistro Mirey, and all opinions expressed are my own.