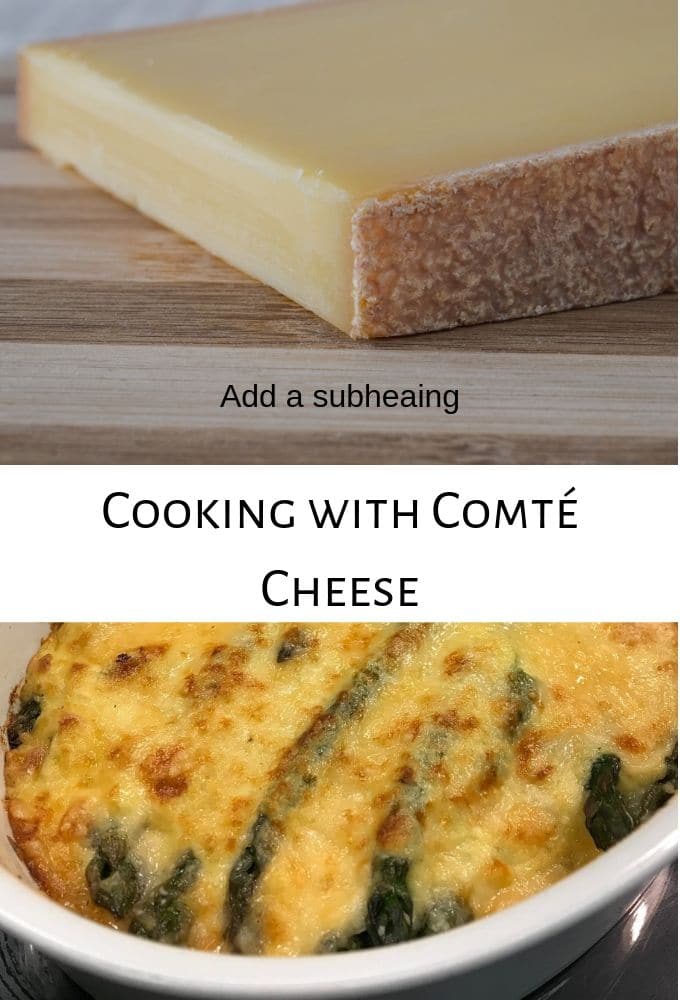 A look at one of the world’s most popular cooking cheeses, and recipes to try. 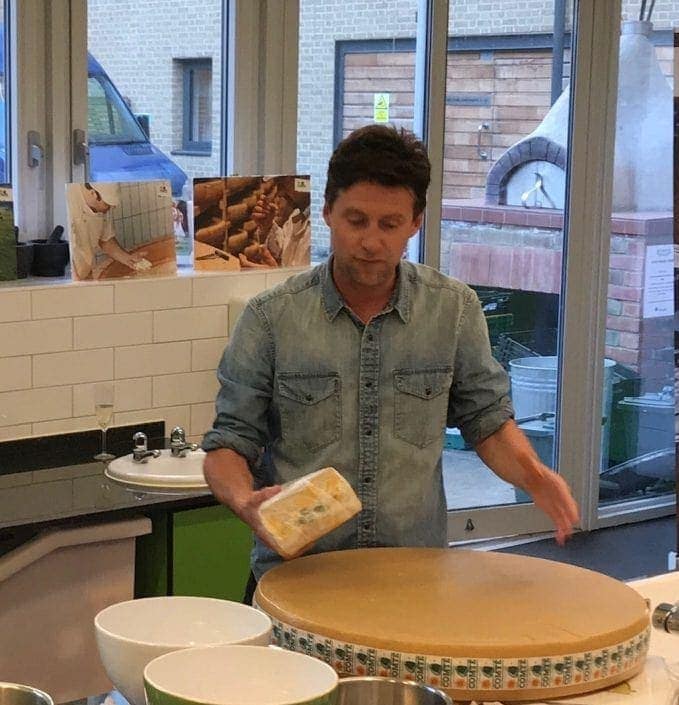 I was delighted to attend an evening of cheese tasting and cooking with Comte Cheese UK at the Central Street Cookery School in the City of London.

The evening began with a very informative talk on the production of Comté cheese.

Comté is one of the most popular cheeses in France. It is a dense, pale cheese with a natural rind.

It is produced in the beautiful Jura Massif region of Eastern France where it has been handcrafted for more than 10 centuries. This region, has integrated Comté into every aspect of  community life.

To preserve the traditional methods used to produce the excellent taste and quality of the cheese, Comté was awarded the AOC status* (Appellation d’Origine Contrôlée – translated to mean protected designation of origin), in 1958. This is the French certification for certain geographical specifications for wines, cheeses, butters and other agricultural products.

The AOC, ensures that every step is based on the traditional specifications combined with modern day technology. (This is similar to the DOP in Italy.)

Production of Comté begins with the breed of cow and its pasture, to the type of milk, the process of making the cheese, the maturing stage and finally the grading. As such, it is run as a large protected co-operative as each step is looked after by specialists working in their area of expertise.

There are roughly 2700 farms supplying raw milk to the 153 small village dairies or fruitiers where the cheese is made. It is then sent for maturing to one of the local 16 affineurs. 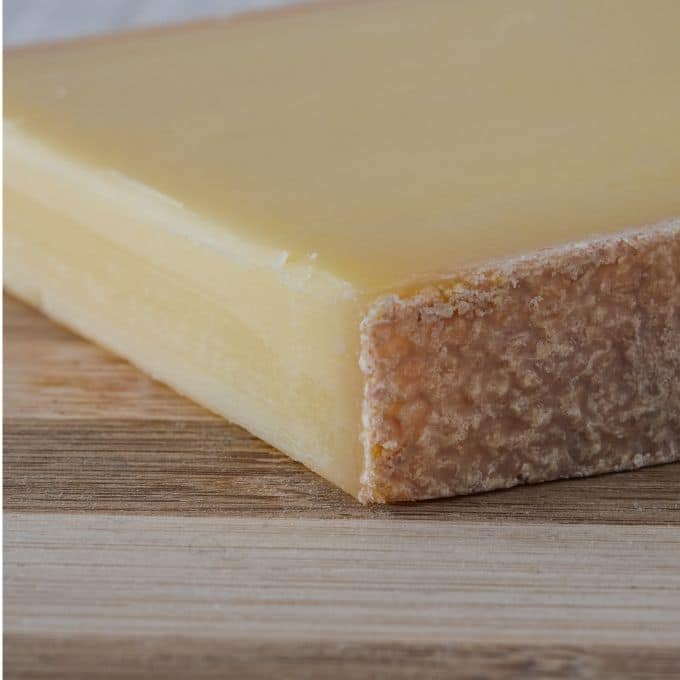 Breed of cows for Comté

The delicious flavour of Comté originates from the raw milk of the Montbéliarde and French Simmental cows of the region.

The cows are allowed to graze on vast pastures as strict rules stipulate that there must not be more than one cow per hectare (2.5 acres) of grazing pasture.

In the summer there are over 100 different types of plants, flowers, herbs, and wild grasses, for the cows to graze on, so their diet is rich and varied.

Raw milk is absolutely essential in the production of good quality cheeses, as the microbes and microflora in the milk develop the flavour. The reason pasturized milk is not used, is that the process destroys all the important microflora and bacteria in milk, making it necessary to add man-made cultures for the production of cheese. This produces a very uniform and less tasty cheese.

The cows’ rich and diverse diet produces a very high quality milk with slight variations in its taste. This gives Comté its variations in the character of the cheese – its taste, scent, colour and texture.

Summer cheeses are different in colour and flavour to the paler winter cheeses when the cows are fed a diet of locally harvested hay.

In the winter, the fruitiers also make the runny cheese Mont d’Or, and the semi-soft Morbier (with the characteristic black line of tasteless ash running horizontally through the middle).

How Comté is made

The wheels are moved to large caves and cellars to be looked after by the affineurs. These are temperature controlled, and here they are aged anywhere from 4 month to 24+ months, typically for around 12-14 months.

Here the wheels of cheese are regularly turned once a day, after rubbing them with a brine solution (robots are used for this). The salt helps form a natural rind.

The cheeses are tapped to listen for any possible flaws, such as cracks, in the wheel which might affect the grading.

A cheese iron is inserted into the cheese wheel and a thin plug of cheese is removed so the affinuer may determine the stage of maturity and its grade.

The Comté will sometimes carry the name of the cellar where it was matured.

Comté is graded out of 20 according to its strength.

The taste of Comté

One Comté cheese might have a firmer texture with a nuttier flavour and another might be smoother with a floral taste. It really depends on several factors, such as the altitude the cows were grazing at, the time of year, and the skills of the affineur during the maturing process.

While a 4 month old Comté will taste mild and smooth, a 24 month old cheese will be dry and crumbly with a more intense flavour.

There are 83 possible flavours to be found in Comté cheese. Comté Cheese UK have a flavour chart where they are arranged  according to 6 aromatic families. What you taste comes down to the flavours your palate can identify.

So each wheel of Comté is absolutely unique! 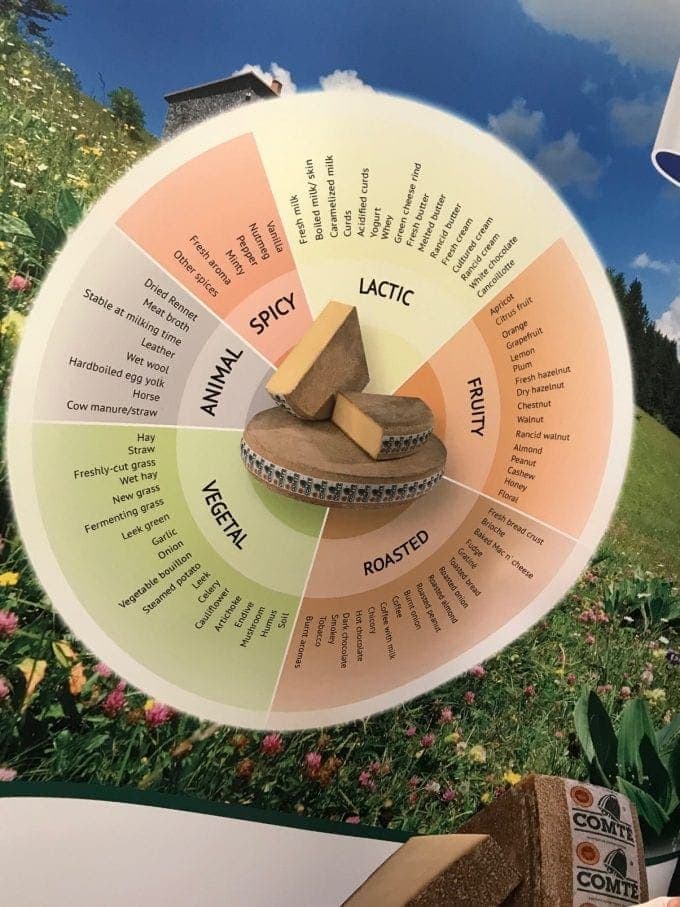 The range of flavours identified in Comté make it an excellent cheese for many dishes.

Around 400 litres of milk are used to make one 40 kg wheel of Comté. As Comté has a such a high level of calcium, it melts very well, making it an ideal cooking cheese.

Cooking with the aged, older cheeses imparts an absolutely wonderful flavour to the dish.

After the talk, British chef, Laura Pope introduced some of her recipes she created for Comté Cheese UK. 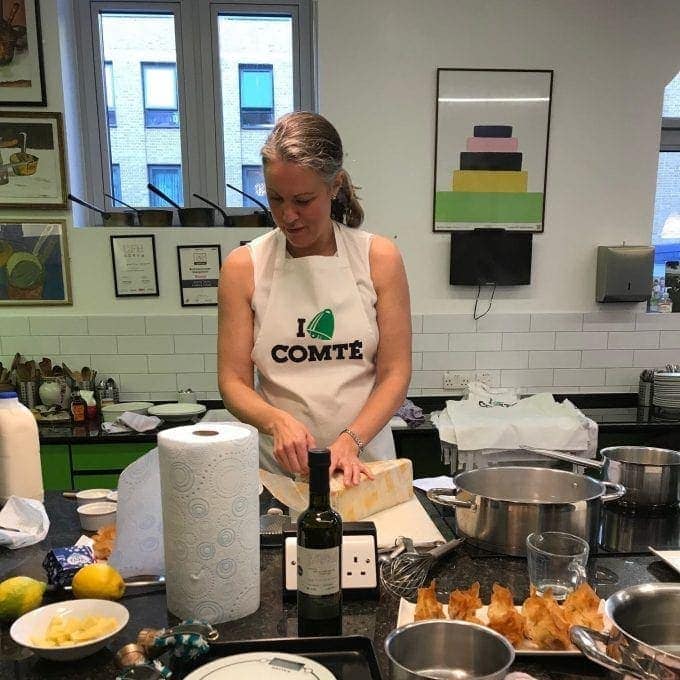 Laura created 6 recipes which can be found here, and include:

Laura demonstrated two dishes, before we made our own in groups, the Baked Comté & Asparagus (see below), and the Comté, Bean, Pancetta and Hazelnut Salad. I have to say, the Comté paired beautifully!

I can’t wait to try the gratin recipe, and I am rather intrigued to try the toasties! 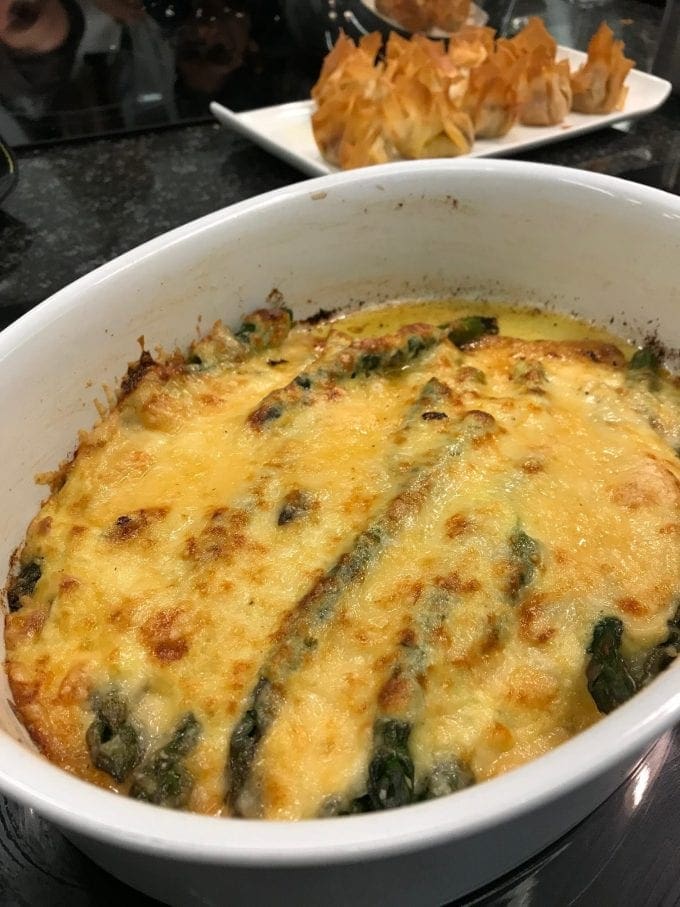 It was a wonderful evening of  Comté and meeting some lovely bloggers. I learned a great deal about one of my favourite cheeses, and we picked up some very useful cooking tips from Laura.

* The origins of AOC date to the year 1411, when Roquefort cheese was regulated by a parliamentary decree.