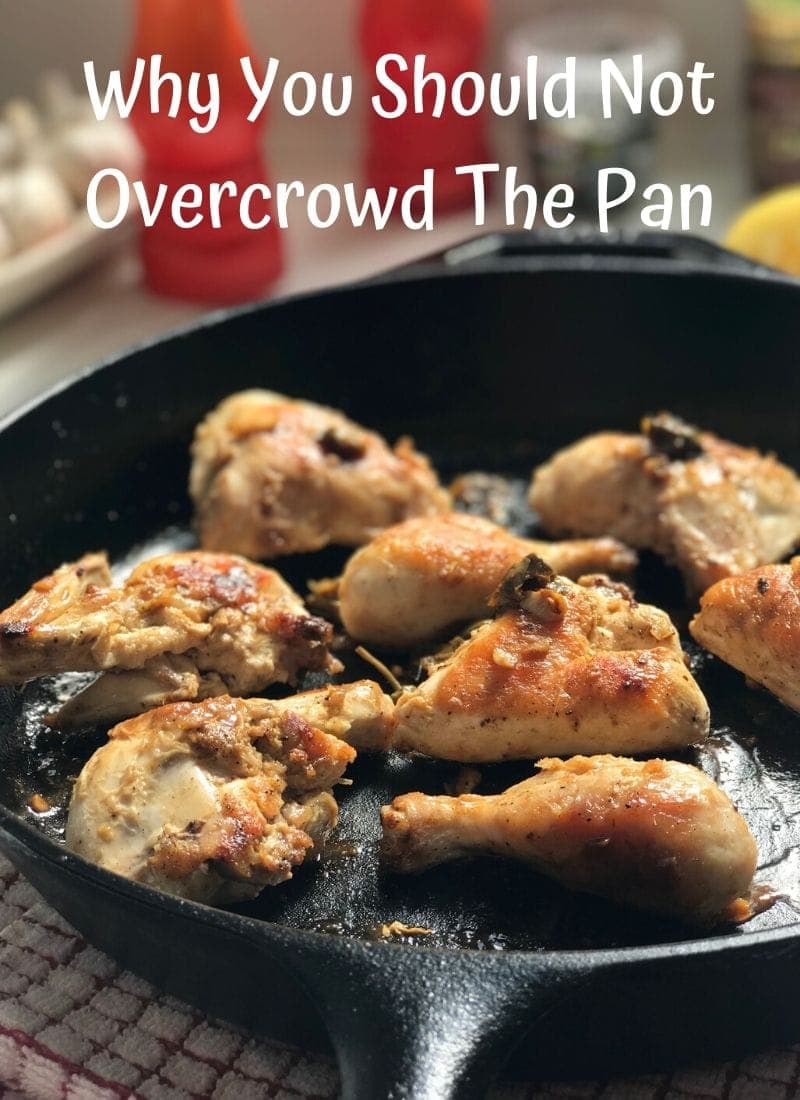 Overcrowding the pan with food takes longer to cook and gives unsatisfactory results. What you should do instead.

A question I have been asked recently, is ‘why should you not overcrowd the pan?’

Overcrowding the pan with food where it is overlapping or placed very closely together, is quite a common mistake when cooking in large quantities.

Whether you are pan roasting meat or vegetables, baking cookies, deep frying or sautéing, it is important to arrange the food so that hot air may pass through, as part of the cooking process.

Find more useful tips for the home cook such as cooking meats to the correct temperature, how to tenderize meat. and why you should not overcrowd the pan.

During any type of cooking, once a certain level of heat is attained, the food releases moisture from all sides.

If the pan is hot enough, this liquid will evaporate, allowing the browning process to begin (see the Maillard reaction, below).

This can only happen as long as the pan is not overcrowded.

What happens when you overcrowd the pan?

When too many ingredients are placed in the pan so they are touching or even overlapping each other, a great deal of moisture is released.

This lowers the temperature in the pan, preventing the liquid from turning to steam and escaping.

The liquid quickly builds up, collecting in the pan, and the food begins to stew. In the case of baking, cookies remain raw, and in deep frying, the temperature of the oil is reduced so the food does not become crispy.

This rules out any hope of starting the browning process till all the water has evaporated, by which time the meat will be tough or the vegetables, mushy.

So, in overcrowding the pan, not only does the food take longer to cook, but the final dish looks rather dull and insipid.

This is an important flavor producing reaction in food where the amino acids react with the sugars at raised temperatures. Once the moisture has evaporated, the Maillard reaction begins and the food begins to brown.

It is responsible for the many colors and flavors when meats are browned or seared (think roast beef, crispy chicken, smashed burgers or steak), the golden brown on french fries, the umami flavour of caramelized onions, golden edges on cookies, etc.

How to pan fry meats

How to pan fry vegetables

Frozen meat can be cooked from frozen, just add an extra 50% cooking time, and place the frozen pieces a few inches apart from each other.

When selecting cookware, choose a suitable sized pan which will accommodate the ingredients allowing space for the steam to evaporate. If not, cook in batches.