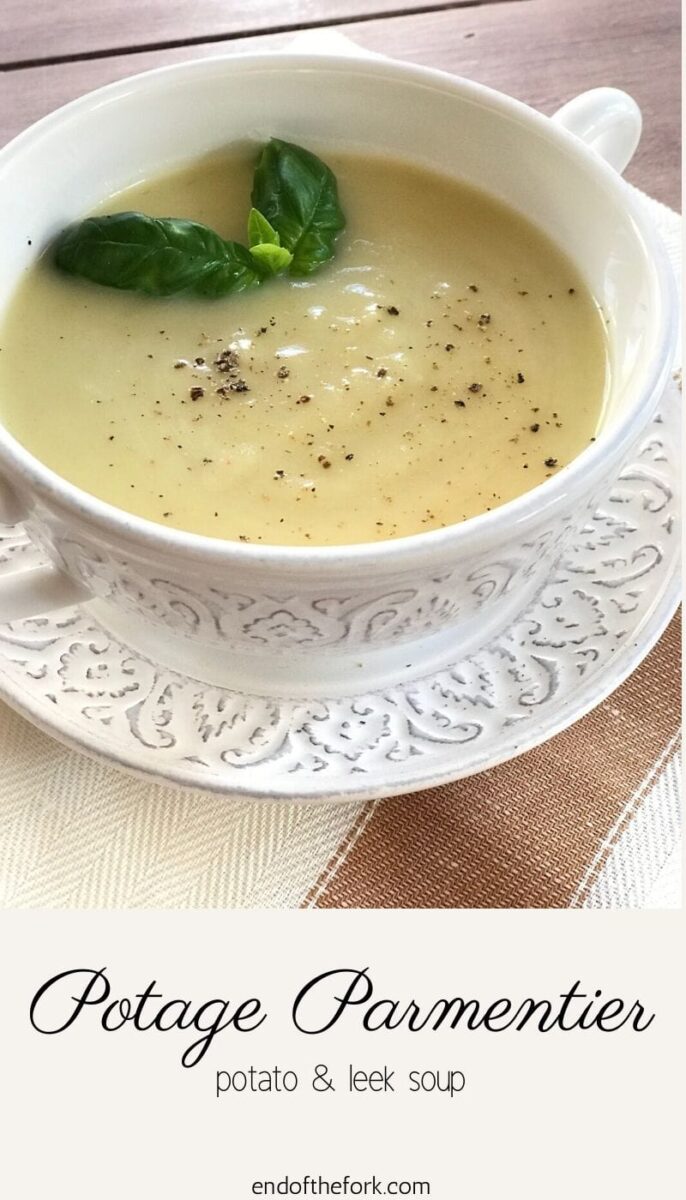 This delicious leek and potato soup is one of the great classics of French cuisine.

This is a simple yet elegant puréed soup which is perfect for warm or cold weather.

Leeks belong to the onion and garlic family and have their own distinct taste, being milder and sweeter than onions. They are nutritious as they are a good source of vitamins A, C & K, minerals, and high in  dietary fibre.

Potatoes are high in potassium and vitamin C. They are also a great pantry staple, here are some tips to keep them fresh.

Whats great about this recipe

The delicate and slightly sweet  leeks balance perfectly with the potatoes, while the stock adds wonderful depth of flavour.

The potatoes make it thick and creamy so small servings are perfect with a piece of warm bread. It can easily be made ahead, making it perfect as an appetizer for a dinner party, for a light lunch, or in a thermos to take to work.

Potage Parmentier is named after Antoine Parmentier, the French agronomist who campaigned during the reign of Louis XVI, to have the potato declared a safe and edible vegetable. At the time, potatoes were banned in France as they were considered to be poisonous, and only suitable for hog feed.

Parmentier was already familiar with the vegetable having survived on a diet of mainly potatoes while being held captive by the Prussians during the Seven Year War.

On his return to France, he initiated a campaign to introduce them as a delicious and healthy alternative to bread. After submitting a paper on the topic, in 1772, the Paris Faculty of Medicine, declared the potato as fit for human consumption.

However, no-one was interested in potatoes, so Parmentier tried a few tactics. He would host lavish dinners and invite Paris’s high society and distinguished men of science, such as Benjamin Franklin and Antoine Lavoisier, to dine on dishes mainly made with potatoes.

As potatoes gained favour with the rich, he targeted the very poor by cultivating potatoes on land given to him by the King. The crop was guarded by soldiers till dusk, and when they left, the needy would help themselves. Slowly more and more people acquired a taste for potatoes.

Then came the famine in the cold winter of 1788-89, and Parmentier opened soup kitchens across Paris offering bowls of comforting and nourishing potato soup to the needy. Potatoes eventually became so popular, they were declared the food of the revolution.

The name Parmentier is now associated with several other French potato dishes such as Potato Parmentier, Brandade de Morue Parmentier and Hachis Parmentier.

How to choose & prepare leeks

All purpose potatoes such as Yukon Gold or Désirée are best as they are not too waxy or starchy (floury).  Starchy potatoes will thicken the soup and make it unsuitable for freezing.

How to make it

You could include an onion in the second stage and cook it with the leeks. I prefer not to use an onion as there is already a hint of it in the stock.

Substitute the chicken stock with vegetable stock to make it vegetarian.

How to serve it

Garnish with some chopped chives, a sprig of parsley or some basil, and a piece of warm bread.

This soup can be enjoyed hot, or cold (Vichyssoise) in the warmer months. To serve it cold, chill for around 4 hours.

This soup goes well with chicken dishes, or this Fish Pie.

How to store it

Transfer to an airtight container and chill for up to 3 days.

This soup can be frozen without the cream. Transfer to a ziplock bag or airtight container and freeze for up to 3 months. Defrost in the fridge overnight, and reheat on the stovetop on medium heat till warm, then stir in the cream (if using).

⭐️ Are you making this recipe? Do let me know how it turned out in the comments! And please give it a star rating below!

Nicole Shroff
This delicious leek and potato soup is one of the great classics of French cuisine. This soup can be made ahead and enjoyed either hot or cold (Vichyssoise) in the warmer months.
4.84 from 6 votes
Prevent your screen from going dark
Print Recipe Pin Recipe Save RecipeSaved!
Prep Time 10 mins
Cook Time 30 mins
Total Time 40 mins
Course Appetizer
Cuisine French
Servings 4 people
Calories 349 kcal

The ingredients here on EOTF are set out in grams & milliliters and in US cups & spoons.

Calories: 349kcalCarbohydrates: 39gProtein: 12gFat: 17gSaturated Fat: 10gCholesterol: 48mgSodium: 476mgPotassium: 1032mgFiber: 5gSugar: 6gVitamin A: 1573IUVitamin C: 27mgCalcium: 105mgIron: 7mg
Did you make this recipe? I’d love to know how it turned out! Let me know by leaving a review below, or snap a photo and share it on Instagram tagging me @Endofthefork.
SUBSCRIBE for new recipes
Facebook Pin Recipe Text Email